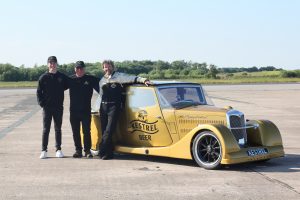 The Flying Kestrel, a 1930s Riley Kestrel 9 found rotting in a barn in Holland and renovated during lockdown has set a new straight-line UK land speed record at Elvington Track in Yorkshire.

The last time The Flying Kestrel was on the track for a test day, it crashed, but its driver and lead engineer Jonathan Webster escaped unscathed.

But on Tuesday, June 22, it lived up to its name and flew to set a new UK straight-line speed record.

As ratified by the UK & International Timing Adjudicators, The Flying Kestrel broke the record for a Class D 2.5 litre engine for the Half Mile Standing Start by over a second, recording a speed of  159.634 mph.

The car, with trademark fastback styling, had not been touched since 1965 when Nigel and Joel McNally from Bedfordshire discovered it rotting in a barn in Holland in early 2020. They commissioned Webster Engineering to the ambitious restoration project, which saw it fitted a specially modified 2.5 litre, 5-cylinder engine capable of 900bhp.

“Plenty of people told us we couldn’t do it,” said Nigel McNally founder and CEO of Brookfield Drinks and The Kestrel Brewing Co. “We have had setbacks and issues, particularly with the aerodynamics on such an old-style 1930s body shape, but we have never lost faith.  Jon and the entire Kestrel team have worked tirelessly and with utter determination to do such an amazing job and I am so proud of all of them. We have learned a lot from the experience and are already planning to get back to Elvington soon and set some more records that would see us break through the 200mph barrier.”

“Records like this are extremely tough challenges when you consider the heritage of this wonderful old car, but seeing the Kestrel Racing team return a year after their first record attempt, we have all seen how hard they have worked on the project. They have never lost belief that they could do this and so we congratulate them,” said Trevor Duckworth of the UK and International Timings Adjudicators in accordance with Motorsport UK.

Riley was one of the most successful light car producers in the British motor industry during the inter-war period between 1926 and 1938.

Car-mad father and son duo, Nigel and Joel McNally of The Kestrel Brewing Company, discovered the car and commissioned Webster Engineering to the ambitious restoration project. Renowned for designing and building bespoke race-winning vehicles at its state-of-the-art studio at Santa Pod Raceway, the company holds numerous records at virtually every national race car event.  John Webster, its principal, has been involved in the build of numerous high-profile vehicles including the world record holding four-cylinder Ford Focus created for Ford USA.

Rather than pull off the track and head into cosy retirement, the car will now take pride of place in Kestrel’s extensive new marketing programme, becoming a roving brand ambassador with its own range of clothing and merchandising, a dedicated website and social media channels, brand advertising and PR campaigns and a busy schedule of guest appearances at live shows and events across the UK and internationally as they return.

The Flying Kestrel takes flight to beat world land speed records in August 2020.. Find out more about the story behind the car here.